When the platypus was first discovered in Australia, European settlers thought it was fake. You can image why. No other animal has a duck-bill, a beaver tail, otter feet, and lays eggs. They’re also the one of the only mammals with venom.

The platypus belongs to a group of mammals called Monotremes. This group has 5 living species in total, the platypus and 4 species of echidnas. All five of these mammals lay eggs and none have teeth. Monotremes are the most basal group of living mammals. 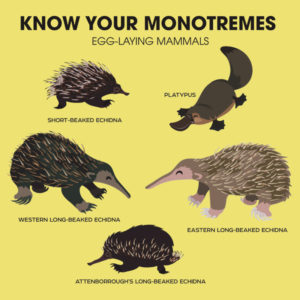 All the species of living monotremes. From Redbubble. 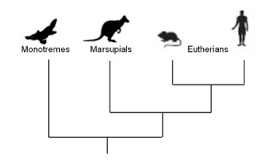 A simple phylogeny (evolutionary tree) showing the relationships of the living mammals. Monotremes lay eggs. Marsupials have pouches. All Eutherians give birth the same way humans do.

The platypus swims in rivers and uses its bill to sense prey in the muddy bottom with electroreception (sensing the electrical current of animals) and mechanoreception (the sense of touch). Did extinct platypuses use the same senses?

A new [article] examined the skulls of modern (Ornithorhynchus anatinus) and one extinct platypus (Obdurodon dicksoni) to try an answer that question. The authors CT scanned and created digital models of the skulls. Then they used a statistical technique to analyze any shape differences in the skulls.

They found that Obdurodon has larger eyes and still has teeth. Interestingly, the bill of Obdurodon points slightly upwards relative to the back of the skull. In contrast, the living platypus has smaller eyes, no teeth, and the bill points more downwards. 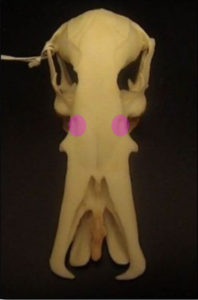 A platypus skull with the infraorbital foramen highlighted in pink.

We have these, too, and in us that nerve sends information from our face to our brains. 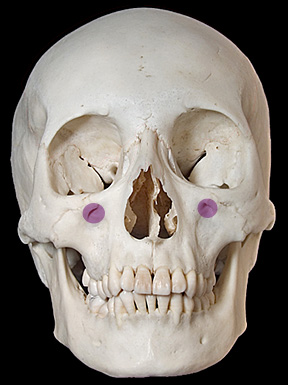 A human skull showing the infraorbital foramen in purple.

Figure 3B and D from the paper. This shows two sections through the snout of the modern (right) and extinct (left) platypus. The infraorbital canal is smaller in the extinct platypus. The size allows teeth to still grow. The modern platypus has a larger canal, so teeth do not have space to grow.

This means that in the past, extinct platypuses (like Obdurodon) used their larger eyes to hunt for prey that was swimming around. Modern platypuses instead use their special senses and downturned bill to dig up prey in the muddy bottoms. As they dig up the mud, the water becomes dark, so vision is less important. They actually close their eyes to hunt!

The modern platypus is one of the strangest mammals around today and because of this study we know a little more about how it evolved.