This week, a new [akylosaur] was described! Ankylosaurs are great. They were like living tanks that roamed the Mesozoic, calmly eating plants that were low on the ground, and smashing threats with their fearfully great tail clubs (note: not all ankylosaurs had tail clubs, but the ones that did surely smashed things with them [I can only assume]).

A reconstruction of Zuul crurivestator by D. Dufault.

This new ankylosaur is the most complete akylosaurid ever found in North America. The paper described its skull and tail club, but a larger paper will come out later describing the rest of the fossil, once it gets prepared out of the rock. 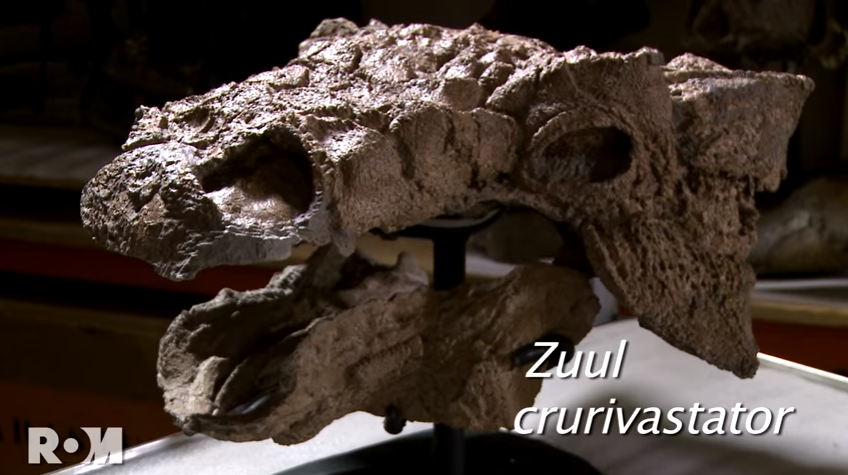 The skull of Zuul. Photo from the Royal Ontario Museum.

The authors named it Zuul crurivestator, which means ‘Zuul’ (after the 1984 Ghostbusters creature) and ‘Destroyer of Shins’ because its tail club was at shin height. Its skull has a bunch of horns that aren’t present on other ankylosaurids, reminding the authors of Zuul.

A drawing of Zuul‘s head on the left and an image of Zuul from Ghostbusters on the right.

The tail club is the longest one from any ankylosaurid from North America and it preserves osteoderms (bone inside the skin layer) along the tail.

A photo of the tail showing the preserved skin, osteoderms, and the tail club. From B. Boyle (Royal Ontario Museum).

It’s from around 76 million years ago – a time for which we did not have ankylosaurs in the fossil record, even though they were present. And, to top it all off, the specimen has soft tissue preserved with it! There is a layer of black, shiny tissue on top of some of the osteoderms in the tail, which could be preservation of the keratin sheath that would have covered the osteoderms in life.

So, to wrap up, Zuul crurivestator is a brand new ankylosaurid. It’s one of the most complete ankylosaur fossils from North America, with a beautiful skull and tail club. And it has soft tissue preservation.