Today’s whale come in two basic varieties: those with baleen, and those with teeth. These two varieties reflect a difference in how the whales eat. The ones with baleen (Mysticetes) filter out the tiny plankton they eat by bringing in large mouthfuls of water and then pushing the water through the baleen.

The toothed whales (Odontocetes) use echolocation to hunt down larger fish, squid, and other foods. 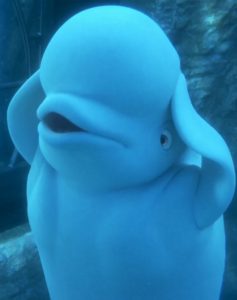 But now there is a third variety of whale thanks to a new [fossil] that was reported this week. This new whale is identified only from its specimen number and its nickname, Alfred, until a larger description is published. Alfred has parts of its skull, mandible, teeth, and some other bones preserved and was found in the Pysht Formation of Washington, USA. These rocks date back to the Late Oligocene (28 to 23 million years ago). Features of its head tell us that it was Aetiocetid whale, however we do not yet understand how these whales are related to the whales of today. 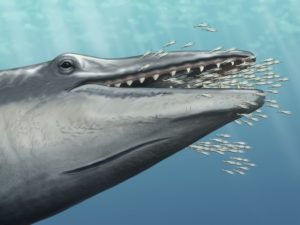 A reconstruction of Alfred by C. Buell/Museums Victoria.

Alfred’s teeth preserve microscopic grooves that can tell us about how it ate. Teeth are made up of soft dentine on the inside, and hard enamel on the outside. If an animal is continuously eating rough food, then the enamel will wear away. If the animal is chewing or eating in the same way day after day, then the wear pattern we see on the enamel can show us how that animal ate. By analyzing Alfred’s wear pattern, the authors discovered that it was probably using its tongue to create a suction force to bring in prey. Alfred would then expel the water through its teeth. As sand and other hard bits bumped into its teeth on the way out, they created grooves on Alfred’s teeth.

How suction feeding would work in Alfred. By Museums Victoria.

This fossil shows that baleen may have evolved later than we thought, as this whale has no evidence of having had baleen. It also tells us that this suction feeding may have been an intermediate step between toothed whales and filter feeding whales.