Sometimes we find fossils that we can’t quite compare to living animals. We can get a rough idea of what kind of animal they are and maybe what they might have eaten, but the details are unknown. Sometimes it’s because we don’t have enough of the animal’s body parts, but sometimes it’s because they are different from anything alive today.

The animal Kolponomos is like that. From the shape of its head, we knew it was related to the group Carnivora. Carnivorans include dogs, foxes, cats, bears, seals, sea lions, walruses, weasels, skunks, otters, hyenas, mongooses, and a few other animals, that eat other animals. 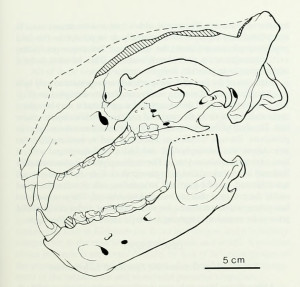 Drawing of a Kolponomos skull done by C. Tarka and L. Meeker at the AMNH.

The odd thing about Kolponomos is that it might be a close relative of bears, but it had molars (those are the teeth in the back that grind up our food) like an otter. Otters eat hard-shelled animals using their molars, but they use tools to crush the shells open if they are too big:

Walruses also eat hard-shelled ocean creatures like clams by sucking the shell until it opens and eating the delicious insides. 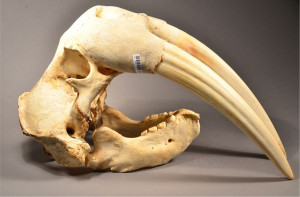 “The walrus has the longest canines of all Carnivorans.” (says Jack Tseng, lead author on the paper)

Scientists couldn’t figure out how Kolponomos was eating these things, until this article came out in Proceedings of the Royal Society B. The authors tested how strong the skull was and how it moved while it bit down.

They found that Kolponomos would dive into the ocean, support its head using its lower front teeth, clamp down on the clam, and twist it off the rock using its strong neck muscles. Then it would move the clam to its molars where it would be crushed open.

Figure 1 from the article.

An interesting point about this is that sabre-tooth cats, like Smilodon would use the same method of supporting its head using its lower front teeth to drive its sabres into its prey.

So Kolponomos is a bear-relative, with a diet like an otter or walrus, with a bite like a sabre-tooth, that lived by the ocean. Probably not in a pineapple though.