Joan Wiffen was born in 1922 in New Zealand. Her father thought education was wasted on girls, so Joan didn’t get to go to high school. When she grew up, she joined the Women’s Auxiliary Airforce during World War II.

Joan got married in 1953. After a time, her husband signed up to take a geology class, but got sick and couldn’t go. Joan eagerly took his spot in the class, remembering her love of fossils as a child. She saw on a geologic map that a nearby valley had ‘old reptilian bones’ and went out fossil hunting near her house. In 1975, she found a fossil! She knew it was a vertebra, part of the backbone of an animal, but didn’t know from what animal. 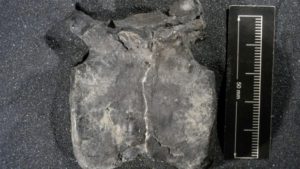 A replica of the vertebra Joan found. Photo by Marianna Terezow/GNS Science.

In 1979 she went on vacation to Australia and visited the Queensland Museum. She met Ralph Monar, a paleontologist there and noticed a familiar looking bone on his desk. It was a vertebra exactly like the one she had found! He told her it was part of a dinosaur tail. She had found the first dinosaur fossil from New Zealand! 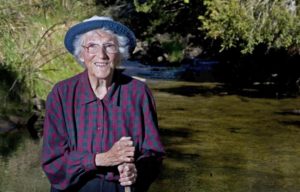 Joan Wiffen at the site where she found her first fossils. Photo by NZPA/John Cowpland.

Ralph and Joan worked together on many projects and published dozens of papers. Because of Joan’s hard work, she was known as the Dinosaur Lady. Even though Joan had not gone to school, she received an honorary doctorate from the Massey University of New Zealand in 1994. She also received a special award from the Queen.