This week I’m going to continue telling stories about my trip to Utah with the Burpee Museum, because it was so much fun it deserves 2 posts. Today I’m going to focus on the other part of field work: prospecting! I’ll also list some animals we saw, and share some photos.

First: prospecting. Prospecting is when we go to a new area that has exposed rocks of the right age to try and find fossils. We know where the rocks are because of geologic maps or satellite images. The process is very simple. We drive (or hike) to the area, and then we spend a couple of hours walking up and down the rocks looking for anything that might be bone.

Sometimes we’re lucky. Sometimes we aren’t. Sometimes we find bone, but it’s modern (like in the video) and so we put it back. For these hikes, it’s good to have a lot of water and a snack if you’re like me and get hungry often. It’s also good to take breaks every so often and take in the view, or build a cairn (balanced rock statue or stack) for funsies. 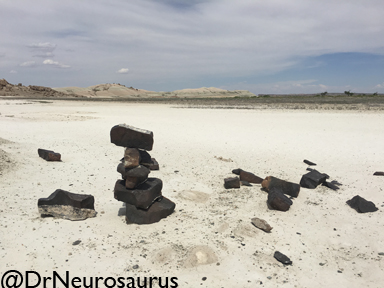 If we had found something, we would use tools to see how big the fossil is. If it is small, we could take it out and wrap it in toilet paper. If it’s too big, we mark it and see if there’s time to pedestal and jacket it (like I showed last time). Prospecting is really fun because you never know if you’re going to find something while enjoying spectacular views.

Second: animals! We saw a bunch of animals on our trip. The first day we saw a herd of pronghorn antelope. I only managed to get a few blurry photos, so instead here is a nice one from the internet: 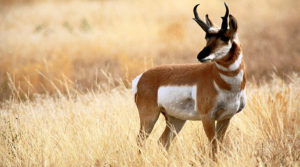 Pronghorn are the fastest mammal in the US because they had to outrun American Cheetahs before the cheetahs went extinct.

We saw a rattlesnake, which we decided to escort off the road so that it didn’t get run over.

At night we also saw kangaroo mice and bats. Couldn’t get any photos of them. Lastly, we had some visitors at basecamp – an 8-inch long centipede that we captured and took outside. 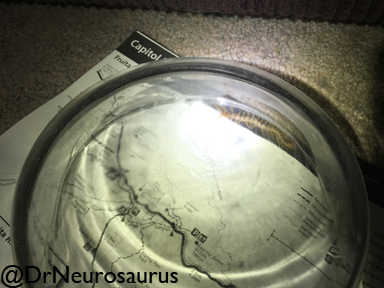 And what was later identified as a sun spider or solifugid: a carnivorous arachnid that feeds on insects and other small things. Scary looking, but usually harmless to humans. It was also escorted outside. 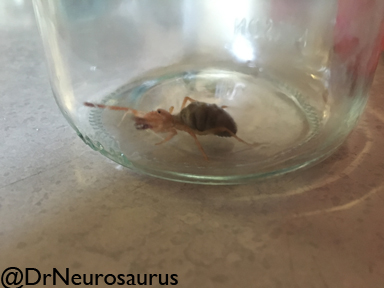 Lastly: Photos of rocks. We went to [Capitol Reef National Park] on our last day and saw beautiful exposures. 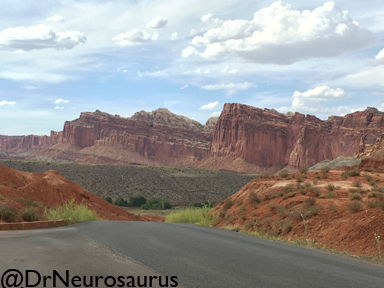 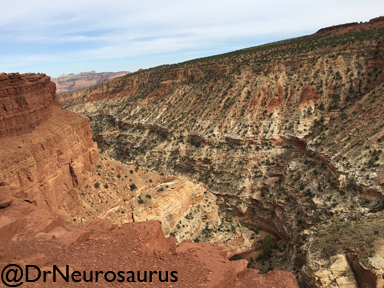 It’s easy to forget that the planet can look like this when you live in the suburbs. I gained valuable field experience from this trip, and I will not soon forget the adventures I had in Utah. The best part is, you can participate, too! The Hanskville Burpee Dinosaur Quarry offers tours while the site is open and is always looking for volunteers to help dig. See [here] for details. Look for closer opportunities through local natural history museums or universities as well! It’s a big planet. Go out and explore!